Sophia was bred here at Hopeful Farm and is the granddaughter of our foundation mare, Action Battle xx. Action Battle produced two broodmares for us, Verb. Prem. St. La Championita HF (by Le Champion), and Replikah HF (by Regulus).  Action Battle xx, known as "April," was a Champion Children's Hunter on the A circuit in Illinois.

Sophia's sire is the well known Oldenburg stallion Stedinger, a son of the very famous Sandro Hit.  Sandro Hit is arguably THE stallion of his time, producing hundreds of approved breeding stallions and Premium mares, Grand Prix dressage horses, Bundeschampionate winners and finalists for the World Championships for Young Horses.

Sophia's sire Stedinger showed successfully through the M Level of dressage and has been trained beyond. He maintained a heavy breeding schedule at the Sosath breeding station in Germany. In 2010 and 2011 the mare Toerveslettens Stamina and Andreas Helgstrand were an eye-catcher at every event: Stamina became Dressage-Champion in Denmark, she won the Dressageshow at Falsterbo Horse Show and was placed in the final of World Championships for young dressage horses as a 5- and 6-year-old. Stedinger's son Schumacher won the bronze medal at World Championships. By that Stedinger was the only sire who had two finalist at the World Championships final. Socrate de Hus became Champion of France three times in a row - as a 5-, 6- and 7-year old horse.

Stedinger was leased to Sweden for one year of breeding in 2012.  In 2013 Stedinger moved to Australia to David and Amanda Shoobridge's stallion station, Revelwood.

Sophia's dam, Replikah HF, was bred here at Hopeful Farm. Her sire is the Rheinland Pfalz-Saar and AWR approved stallion Regulus, who descends from a highly successful Holsteiner dressage pedigree. His sire, Rapport, retired successful in competition at Grand Prix dressage. Offspring of Regulus have been sold as hunters and dressage horses and are now showing successfully. Regulus' son, Raison D'Etre, won the Selection Trial for FEI 6-Year-Old Dressage Horses in Allentown, PA, thus becoming the East Coast Champion, and went on to become a Grand Prix Dressage horse! Other Regulus offspring are now winning in Dressage, Eventing, show jumping, and hunters! 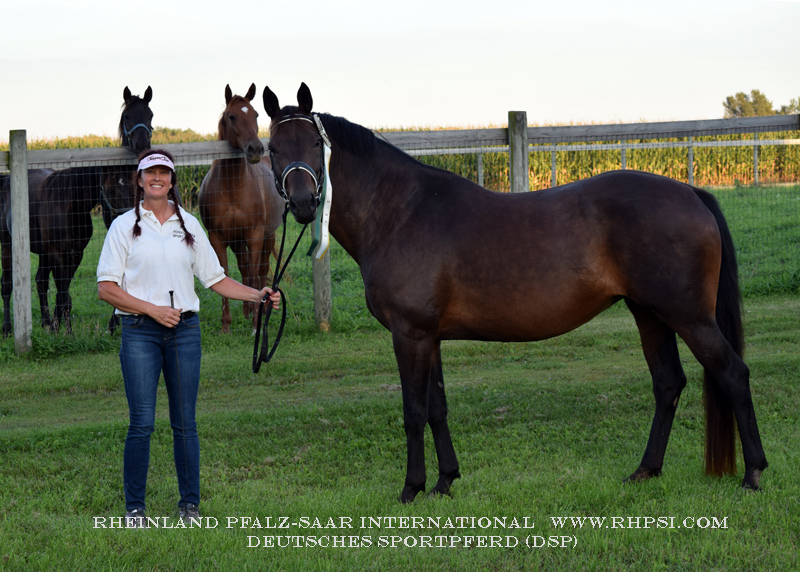 Sophia Loren HF was presented to her registry, the Rheinland Pfalz-Saar International, in September 2016.  She earned scores of 7, 8, and 9s across the board, earning her the Inspection Champion Mare award and her Verband Premium Stute title!